Business without a profit

Creative Handicrafts, situated at Mahakali Caves Road, Andheri (E), is an organization for, of and by destitute women. Their mission is to improve the quality of disadvantaged people, especially women, by empowering them to become economically independent.

Their objectives, amongst many, are to provide opportunities for underprivileged women for entrepreneurship and community businesses and to extend relief to the poor.

The history of Creative Handicrafts takes us back to days in 1984 when Sister Isabel Martin, after completing her assignment as the Novice Mistress, joined Jeevan Nirvaha Kendra, a project of the Maharashtra Kalyan Seva Mandal. This was an eye-opener for her towards the harsh realities of slum life.

Economic self-sufficiency was the need of the hour and this is how the idea of starting a women’s Self Employment Centre started. Being an artist, Sister Isabel had the necessary knowledge of designing and creating soft toys and handicrafts. Thus the Women’s Self Employment Centre found a niche for itself in the local and International market. In 1984 the ﬁrst co-operative society was established. A few women from a far-away slum, Jeri Meri, came to Creative Handicrafts asking the organization to help them establish a center in their area. Today, this is the center that produces the maximum.

Women are ﬁrst provided training, after completion of which they form a self-help-group of 15-20 wherein they start production. The organization helps them organize the production unit and the members themselves are the owners of such units. The members also enjoy the leaves and other beneﬁts as per the rules and regulations formulated by them, which, mind you, are not at all strict! The organization does not make any profit at all.

The women do the product pricing and deliver these at the head office from where they are sold at the same prices. However, the centers make a small contribution from their income for the overhead expenses of the organization. It can be called “very fair trade.”

The organization also tries to impart knowledge to the members, as most of them are illiterate. Whereas the education of the children is concerned, a few preschool nurseries have been organized along with regular medical camps. A creche is opened for the children of working women at the production center and one child each of all the members of Creative Handicrafts is covered under the sponsorship programme.

According to the director Johny Joseph, “Creative Handicrafts is an organization striving for the last 15 years to empower women. You can not do justice in understanding our organization, it’s systems and underlying values unless you pay a visit yourself.” 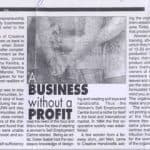 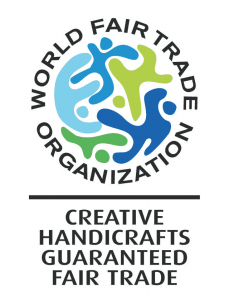 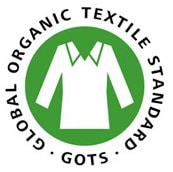